Orangutans and their habitat are disappearing at an alarming rate. Since our Cassia cinnamon comes from the land of the Orangutan, we have chosen this as our social cause.

This year we continued to donate money to provide for the orangutans that we have adopted in the past. We also donated to the Orangutan Species Survival Plan for the advancement of the conservation of orangutans and the Orangutan Information Centre for the protection of the Sumatran orangutan and its habitat. 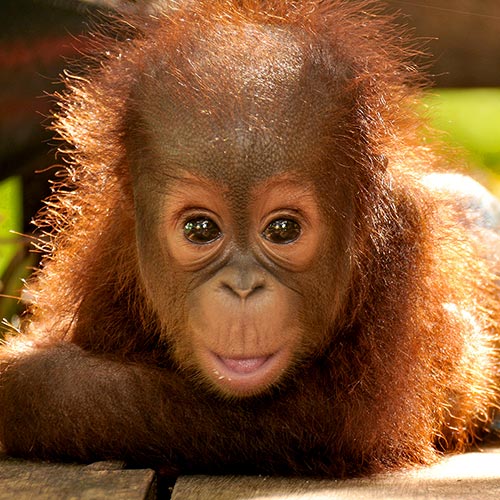 Just two days after the rescue of Cinta, a van pulled up to the gate of BOS Nyaru Menteng. One of the passengers was carrying a tiny baby orangutan. He claimed to have found the baby when he was out with his hunting dogs. The dogs ran towards the mother who quickly disappeared behind the trees. The man grabbed the infant who, he claimed, she’d left behind… Orangutan mothers NEVER leave their babies! The tiny little guy, named Jumbo, is now in BOS Baby School with his new best friend Cinta. 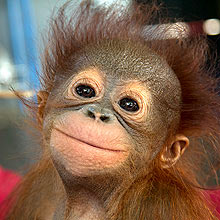 The International Animal Rescue team got an emergency call from the local forestry department informing them that a man had found a tiny baby orangutan alone in a tree in an area called Tanjung Gunung. It’s hard to say what really happened, but one thing is for sure: It is highly unlikely that 2-3 month-old baby orangutan would be alone in the forest without any sign of his mother. The little fellow was given the name “Gunung “ which means “Mountain” in Bahasa Indonesian. 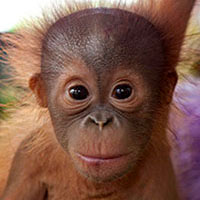 Rickina was rescued in the capital city of Pontianak, West Kalimantan, from a man who claimed that he had encountered a mother orangutan with the baby in the forest, and that the mother was so startled that she abandoned the baby and ran away. The man picked up the baby and in doing so apparently caused a gaping wound on her head with his machete…. A mother orangutan will never leave her infant behind and will fight to the death to protect her baby from aggressors. So what really happened? 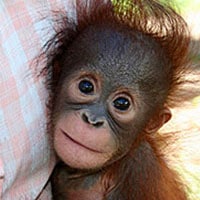 When she first arrived Monti was one of the smallest orangutans at the orangutan rescue center managed by International Animal Rescue (IAR) in Ketapang, West Kalimantan. She was brought to the center after an anonymous caller contacted the local Ketapang forestry officers and told them some rural people had found her all alone in the jungle, but the truth is something altogether different… 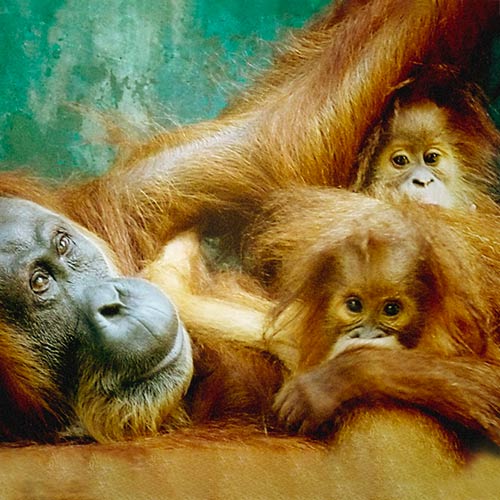 Gober is an elderly female Sumatran orangutan from an area in North Sumatra consisting of rubber plantations and fruit agriculture, completely surrounded and isolated from the native forest by intensive monoculture oil palm plantations. When Gober went blind (due to age-related cataracts), she began raiding crops and the local villagers asked SOCP to remove her from the site.

Gober entered the SOCP quarantine center in November 2008. Kept alone at first, in 2009 she was gradually introduced to another blind orangutan, a handsome male named Leuser who had been shot and left permanently blind. In 2010 they were housed together. Unexpectedly, Gober fell pregnant and in February 2011 delivered healthy twins – a male and female. The male’s name is Ganteng (meaning “handsome”) and the female is Ginting (a common family/clan name from the local quarantine area).

The twins are thriving under Gober’s expert care. She is doing such an amazing job of rearing them. The intention is to carefully reintroduce Gober and the twins to their father Leuser, very gradually, to minimize the risk of accidental injury to the infants. In 2012, following a surgical procedure on her cataracts, Gober’s sight was partially restored! 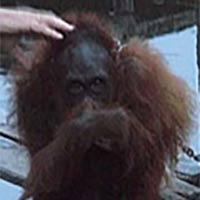 We had heard stories about a female orangutan called Neng for more than two years, but had been powerless to rescue her for lack of any safe place to bring her. Neng was on a short chain, huddled in a small ball at the end of a wooden platform about 30 feet above the water. She was sitting on two small wooden planks. Her face was sunburned and we could see she was scared and severely malnourished. We learned later that her diet for the past six years had consisted only of white rice and an occasional banana… 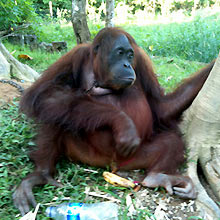 Pingky was chained to a tree for 13 years – so long that the chain was embedded into her neck and had to be surgically removed. Many people prefer to adopt a relatively ‘easy’ and cute young baby but we would also like you to also consider the more challenging orangutans like Pingky. Please support this lovely girl. She has been through so much misery, and it is time for her to learn to become an orangutan again… 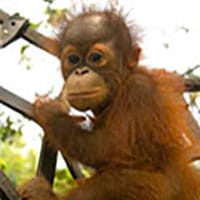 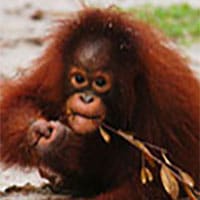 Who Else We Help

OIC was founded in 2001 by Panut Hadisiswoyo. Their focus is working in the front line to save the lives of Sumatran orangutan from life-threatening situation and sustain their survival by working with local communities living alongside orangutan habitat. Together with local communities, they have planted more than two million trees to restore degraded orangutan habitat in Gunung Leuser National Park, part of the Tropical Rainforest Heritage of Sumatra UNESCO World Heritage Site. Furthermore, they are working on the ground to address the problem of human conflicts with the critically endangered Sumatran orangutan in agricultural landscapes adjacent to the Gunung Leuser National Park.

Borneo Nature Foundation (BNF) is a not-for-profit wildlife and biodiversity conservation and research organization that protects and safeguards tropical rainforests and the environment in Borneo. BNF works to protect some of the most important areas of tropical rainforest, and to safeguard the wildlife, environment and indigenous culture on Borneo, including the peat swamps of Sebangau*, home to the world’s largest orangutan population. For 18 years, OuTrop (Orangutan Tropical Peatland Project), BNF’s flagship program, has been working in the Sebangau Forest to monitor the behavioral ecology of the forest’s flagship ape and cat species, carry out biodiversity and forestry research, and work to develop conservation solutions. 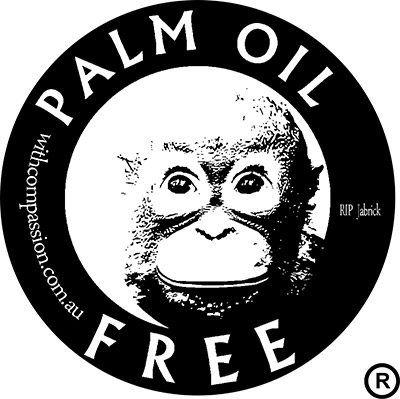